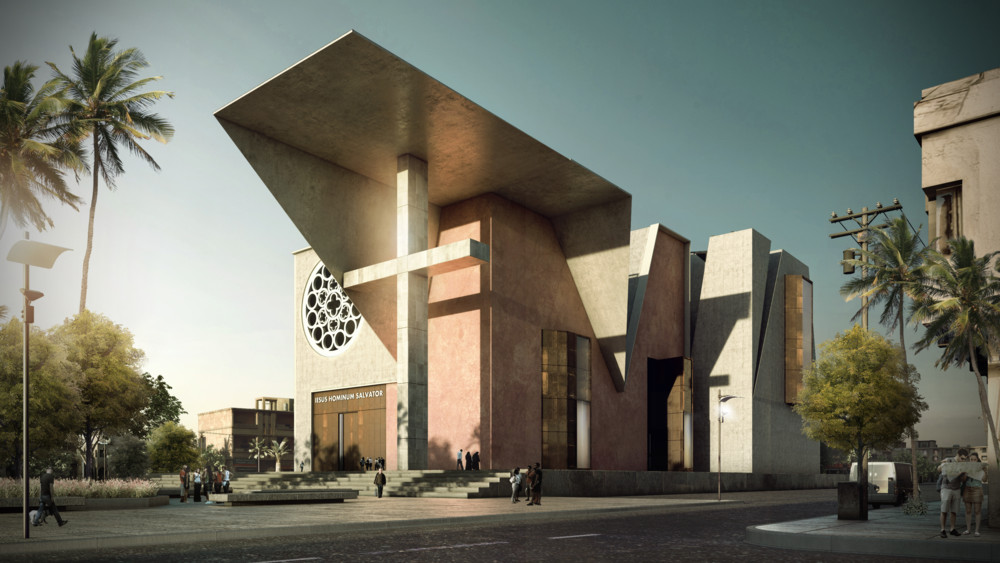 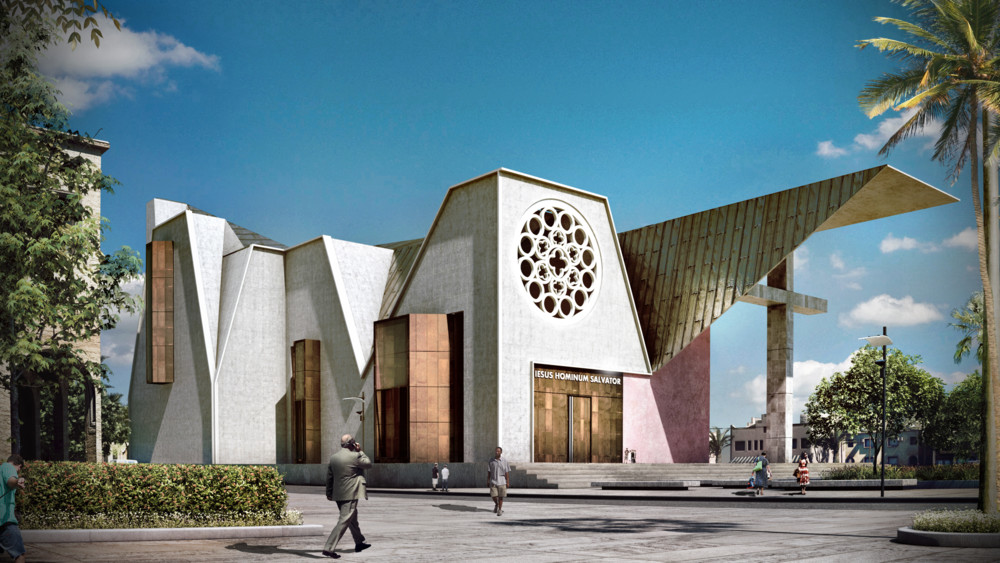 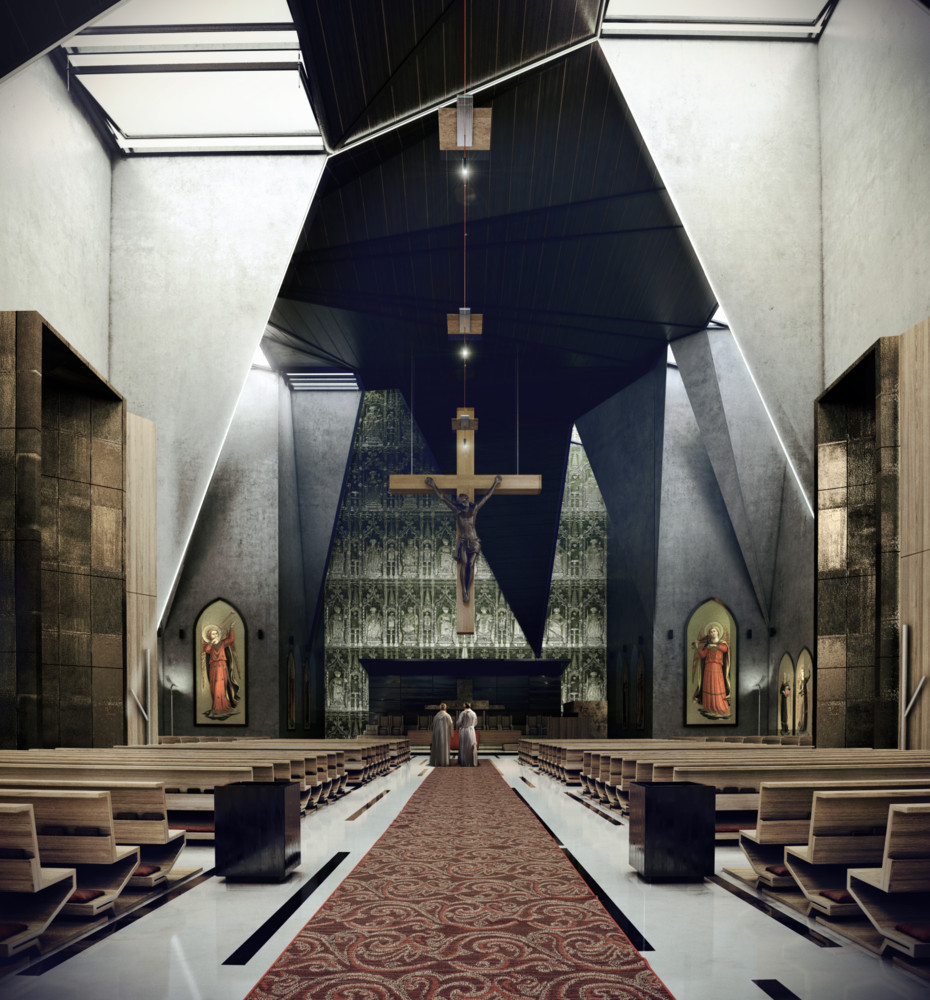 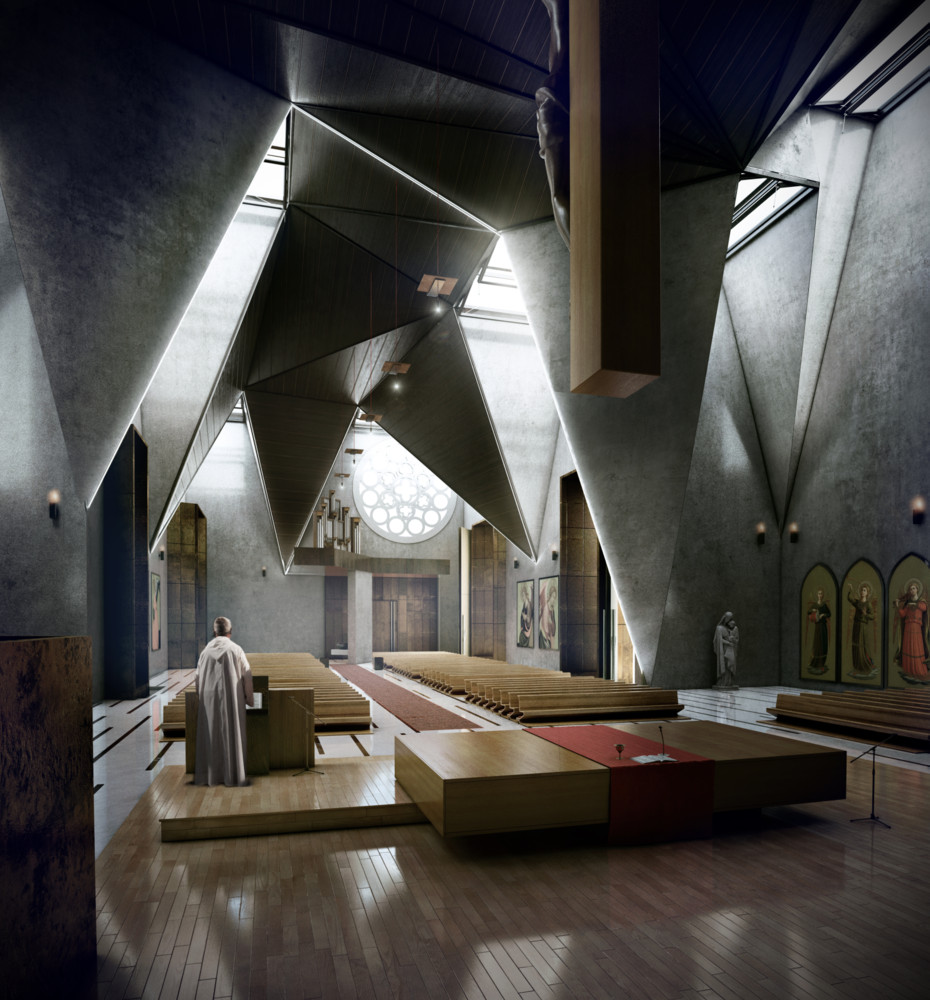 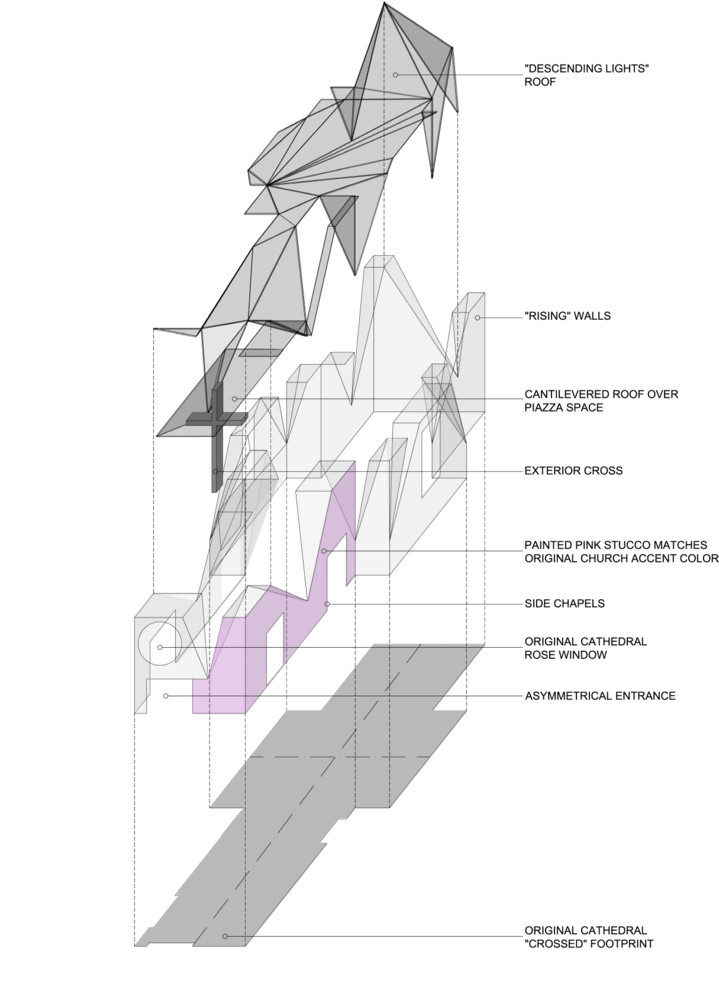 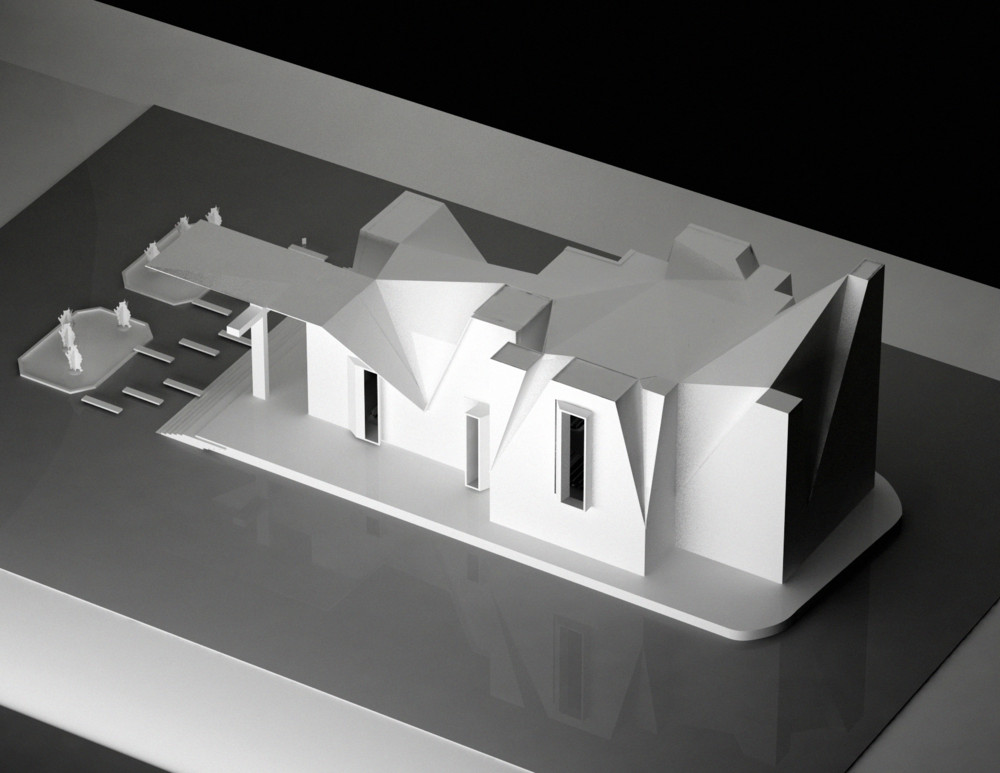 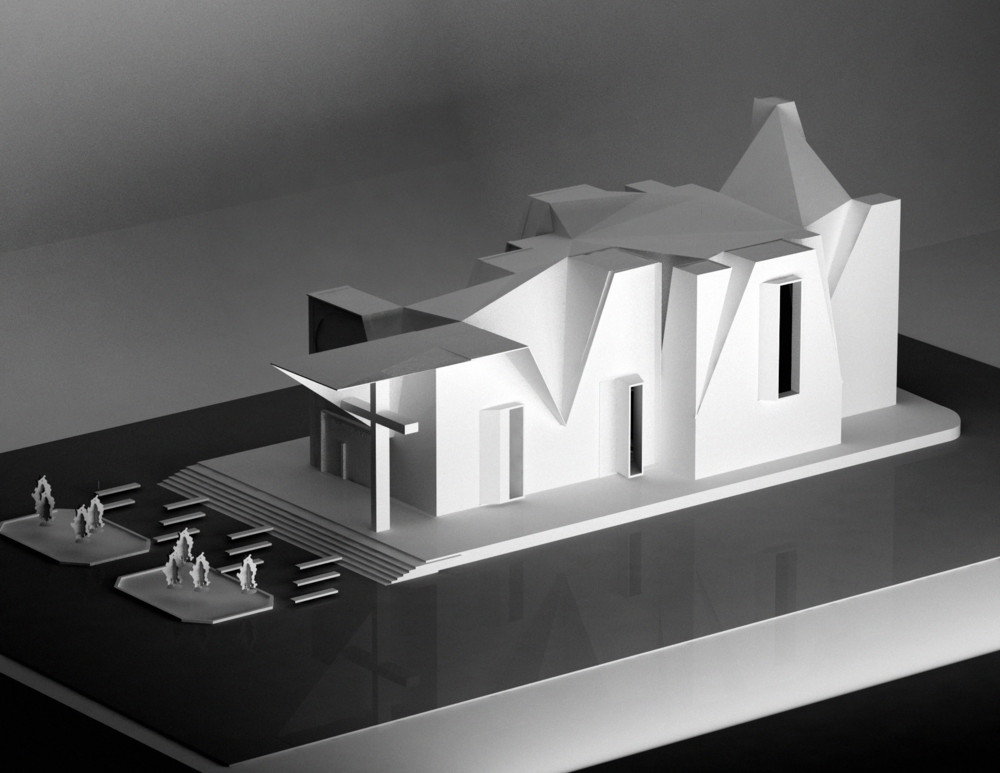 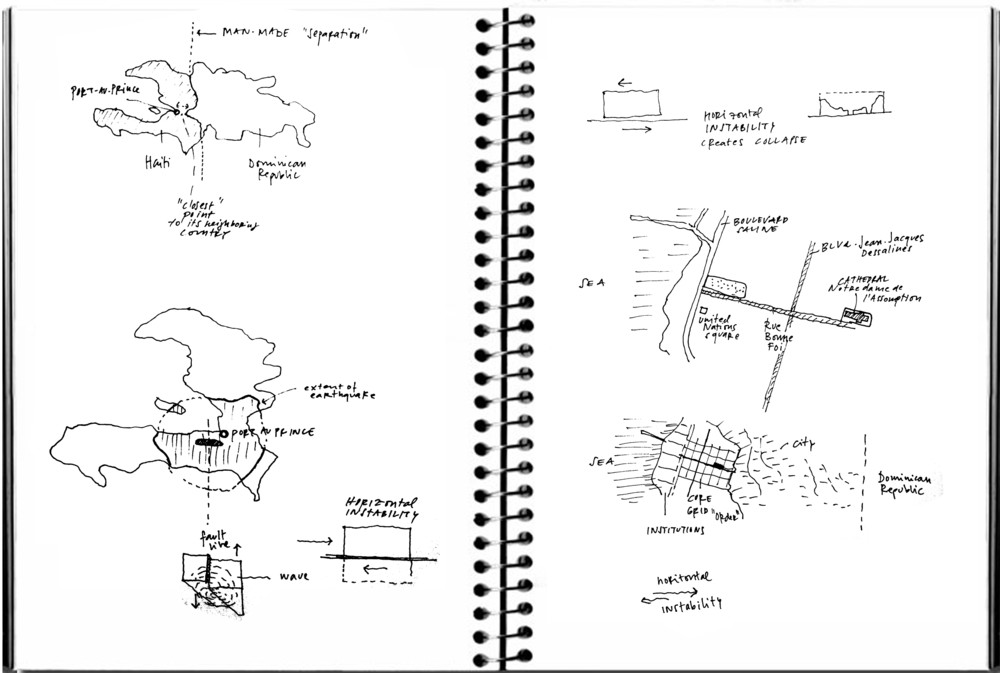 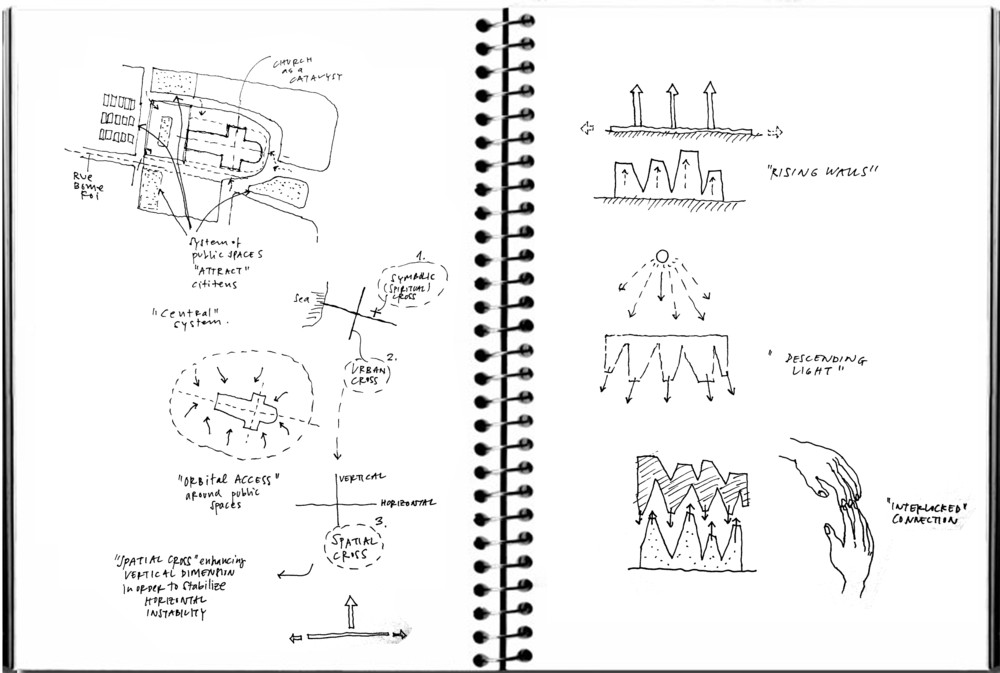 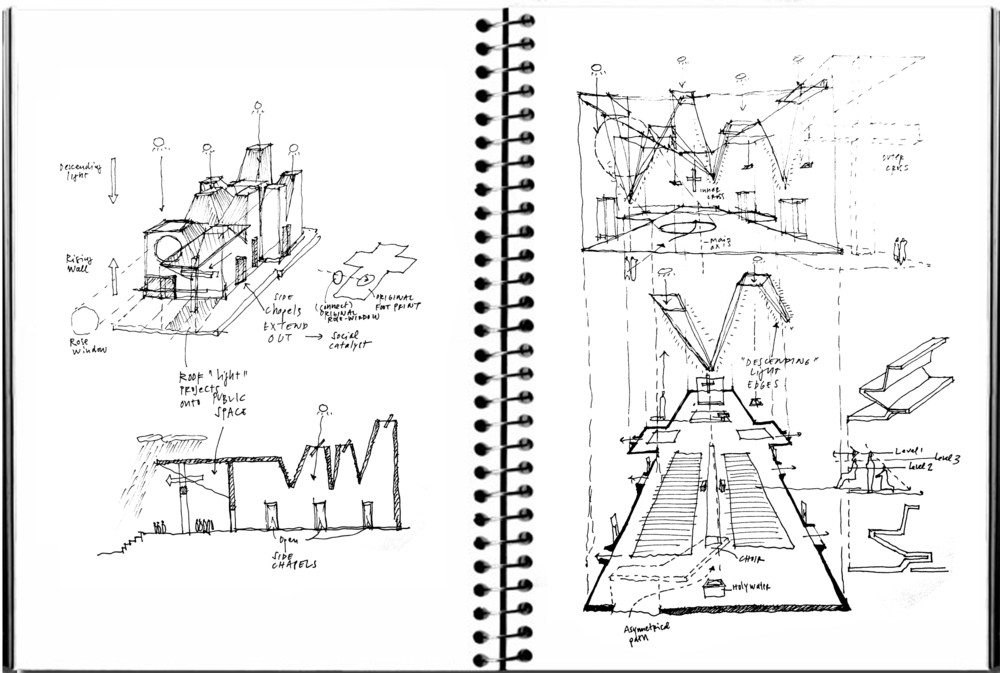 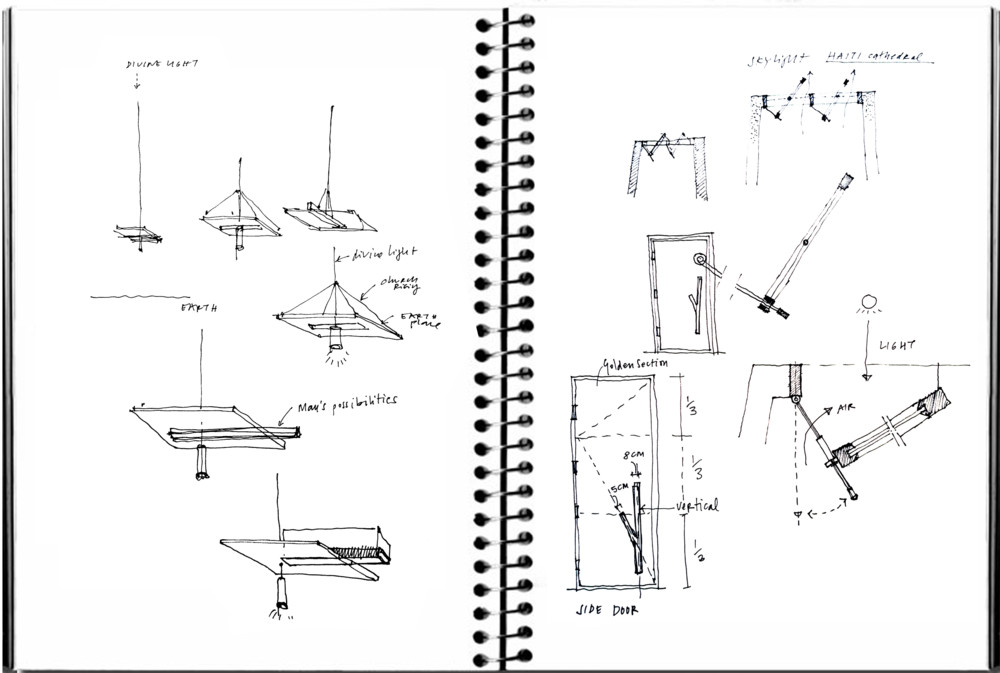 THE HAITI CATHEDRAL
The Cathedral is conceived as the morphing result of two opposite vertical forces, one rising and one descending as they interlock into the volumetric expression of the Church. These two forces are represented by the architectural elements of the building, as in the side walls and the roof. Symbolically nicknamed “the Rising Walls”, the perimeter structure embodies the expression of the Haitian spirit, its people, as it strives to re-build itself after the devastating earthquake. The roof, conversely, named the “Descending Light”, is the expression of the Divine presence which allows the Nation to find a new Hope and Light. These two vertical forces are viewed as opposed to the lethal “horizontal” destruction forces caused by the natural disaster. In their rising direction they are meant to imply a sense of aspiration, a source of ambition for a country deeply wounded in its most essential character. The topo-geography of the roof-scape is seen as the crevices of the Higher Hand as it interlocks the Human Hand into a both lifting and unifying gesture. The church building is thus created by slated walls and ceiling which interconnect and interweave. Their geometric origin complies with both the mandate of the Roman Catholic demand for a cross-shaped floor plan ( the Cathedral is built over the original perimeter of the Fallen Cathedral and follows the main guidelines of sacred design) and the newly found expression on Man and God connecting at a level which is both symbolic and transcendental. As the church allows angles to permit natural daylight to insert itself with the interior and exterior folds, (skylights and side chapels allow for air flow and circulation, symbolically also alluring to the presence of the Holy Spirit), the larger urban fabric is built into the angular orientation of walls, chapels and slants as they extend symbolically to reach the most impacted areas and monumental sites of Port aux Prince. The operable skylights and oversized side-chapels doors are designed to impart a highly sustainable use of the space, fostering air flow and cross-ventilation, while suggesting an orbital and thus universal access to the church from all its sides. The city and its people are invited to enter into the sacred space as both a site for rituals and an enclosed haven for spiritual relief. The vestigial remains of the original Cathedral are kept and integrated into the New Building: the Rose Window, the Cross and elements of the interior walls (re-purposed into both the floor pattern and the iconography placed on the walls interior.) In many ways the project is a re-construction of the original cathedral, while establishing a new symbol for the city and the nation at large.

The church building is thus created by slated walls and ceiling which interconnect and interweave. Skylights and side chapels allow for air flow and circulation, symbolically also alluring to the presence of the Holy Spirit. The Cathedral is built over the original perimeter of the Fallen Cathedral and follows the main guidelines of sacred design.