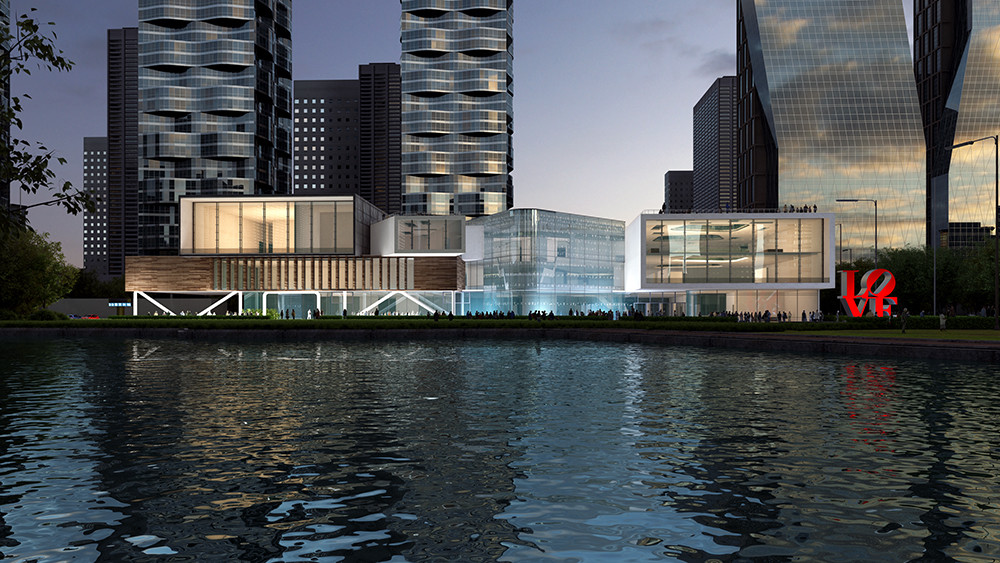 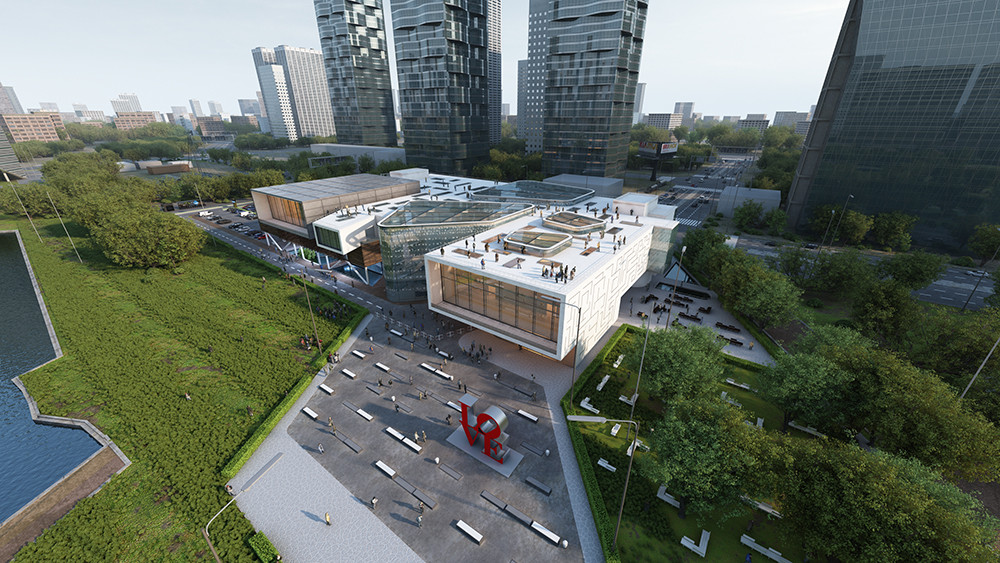 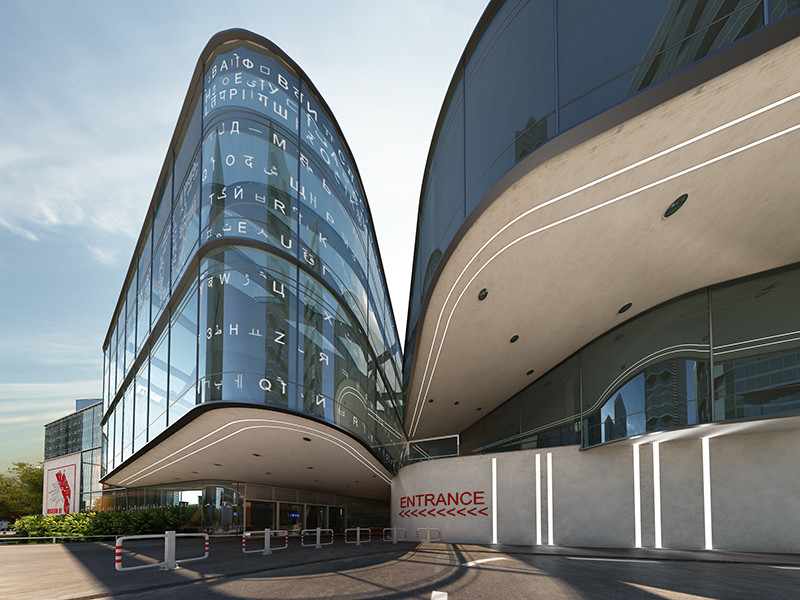 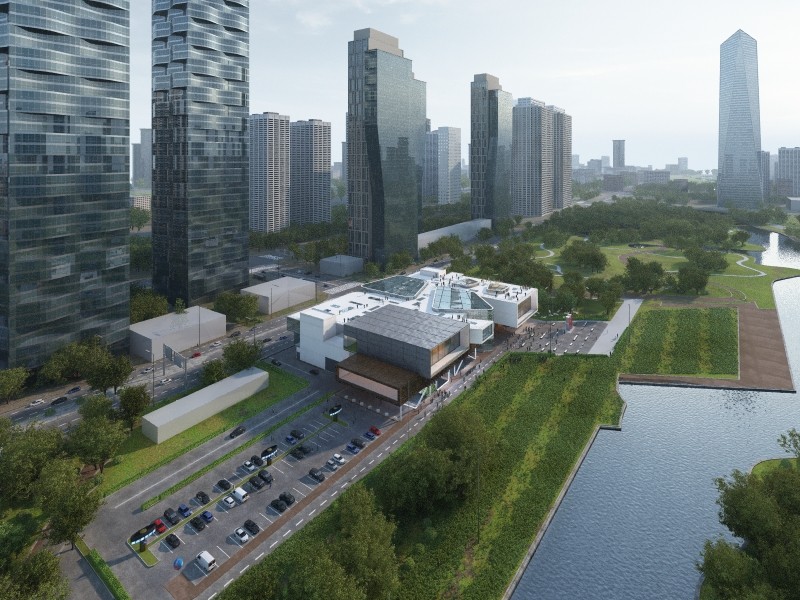 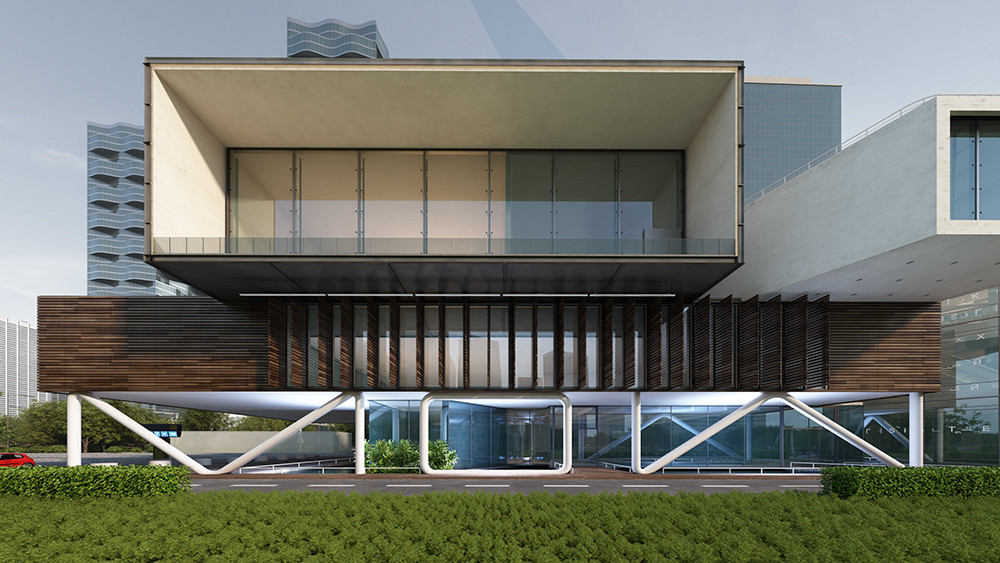 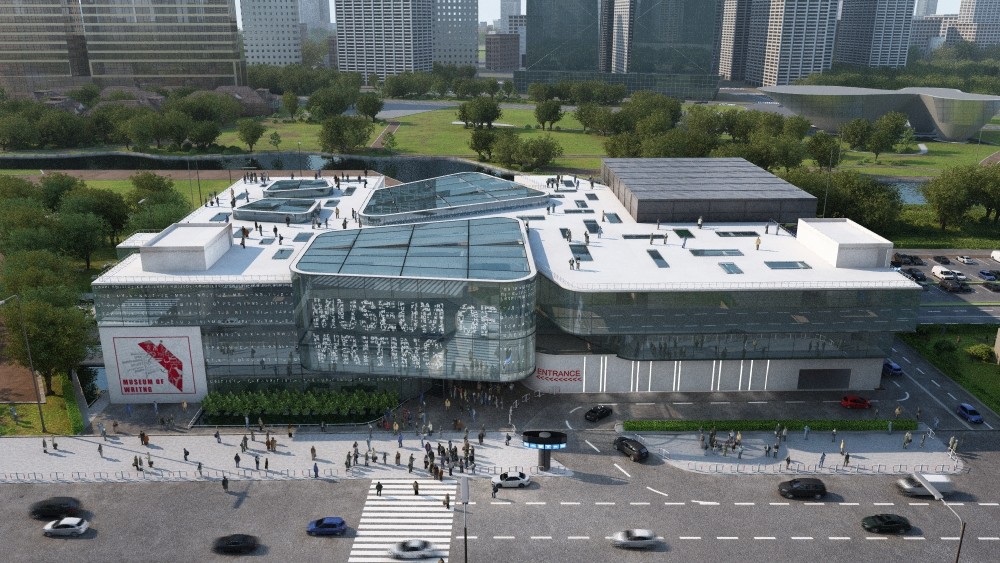 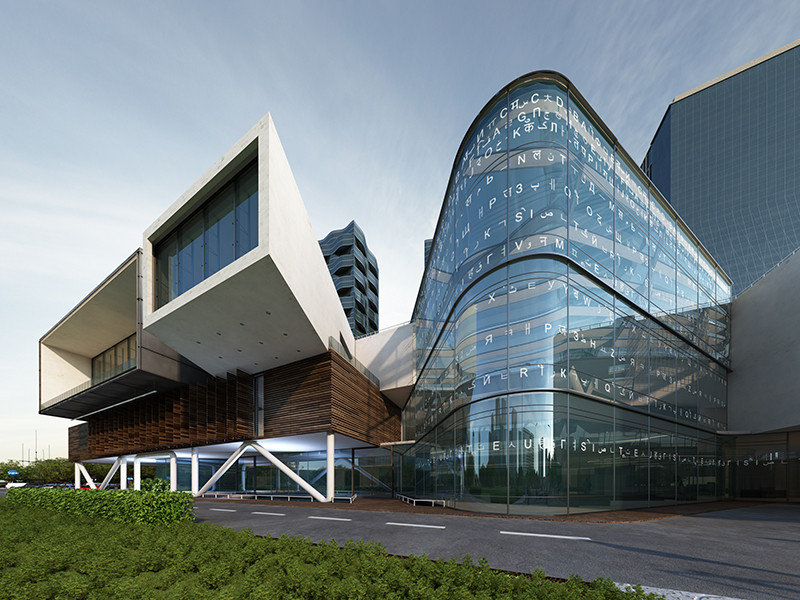 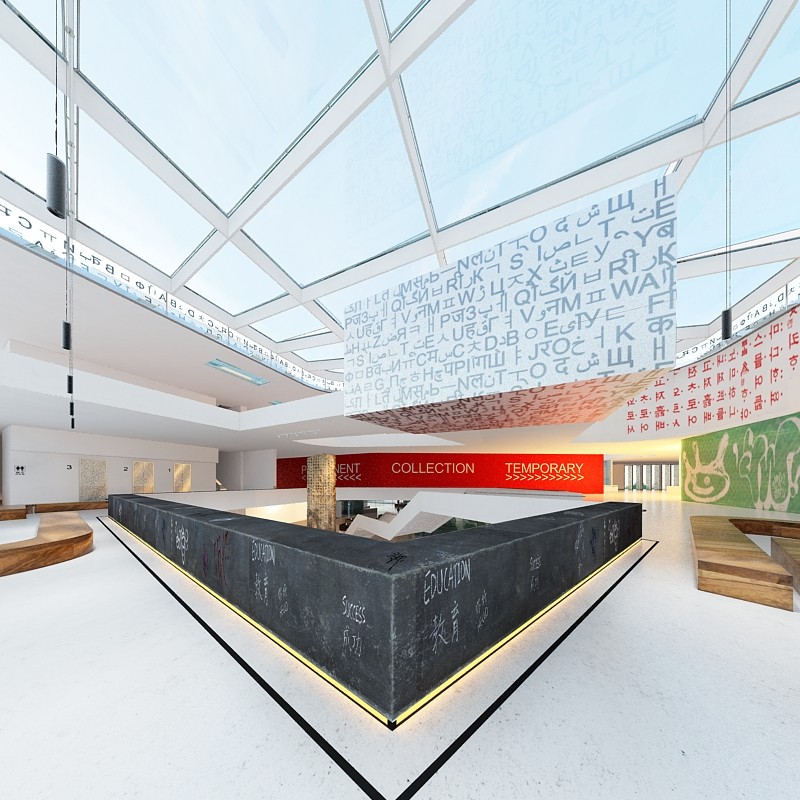 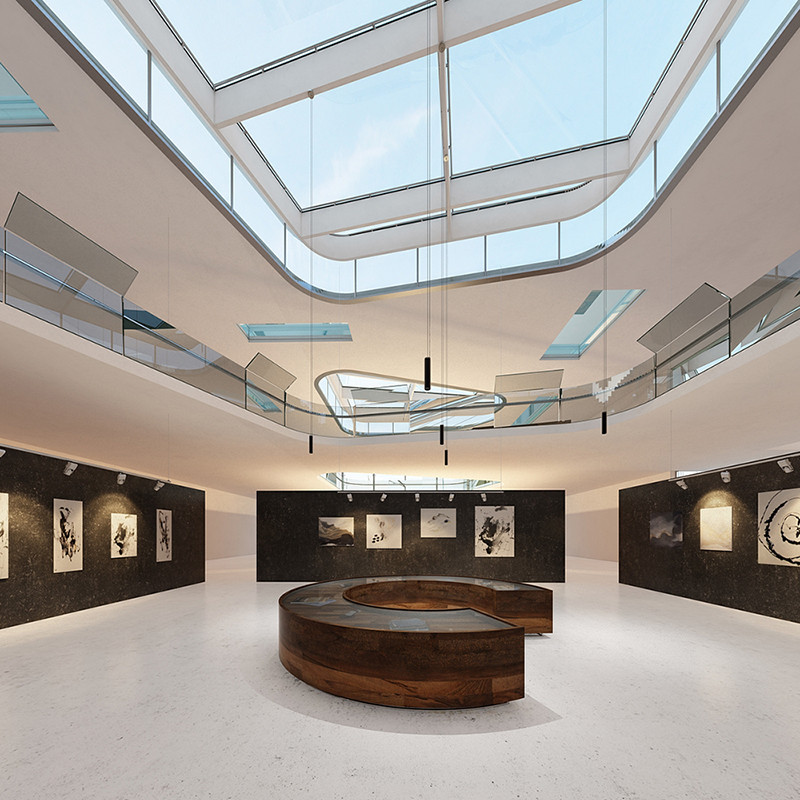 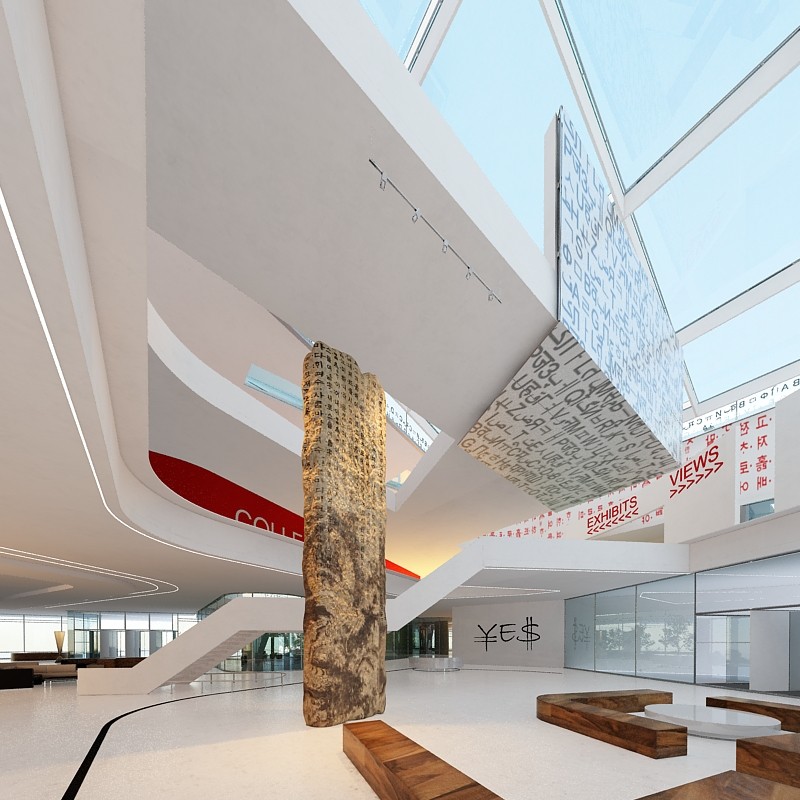 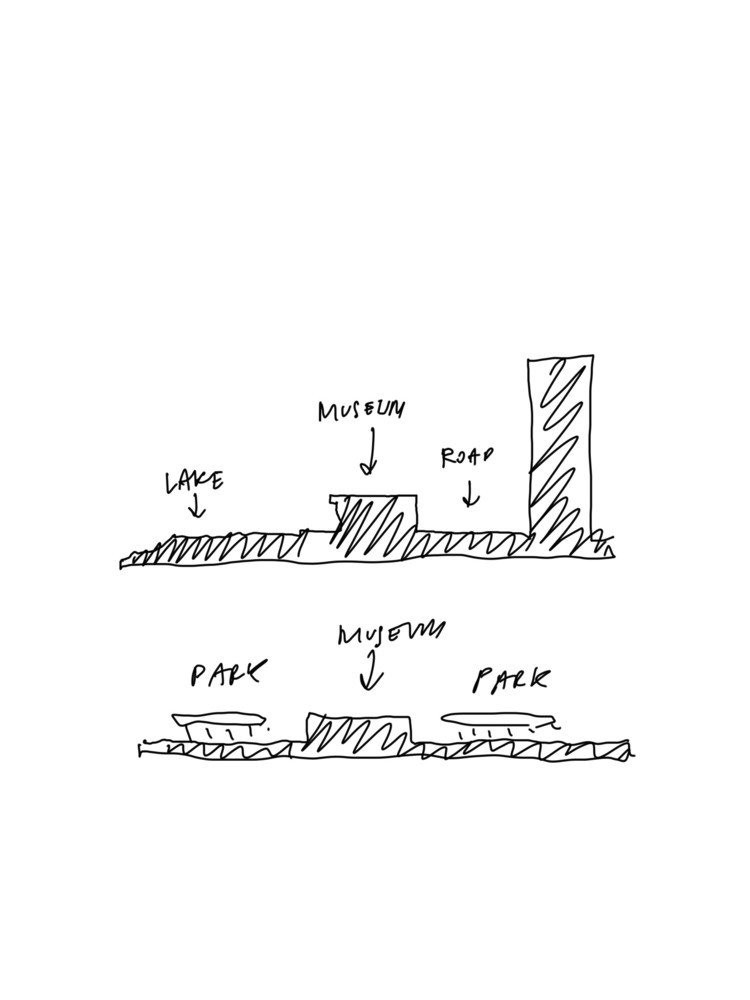 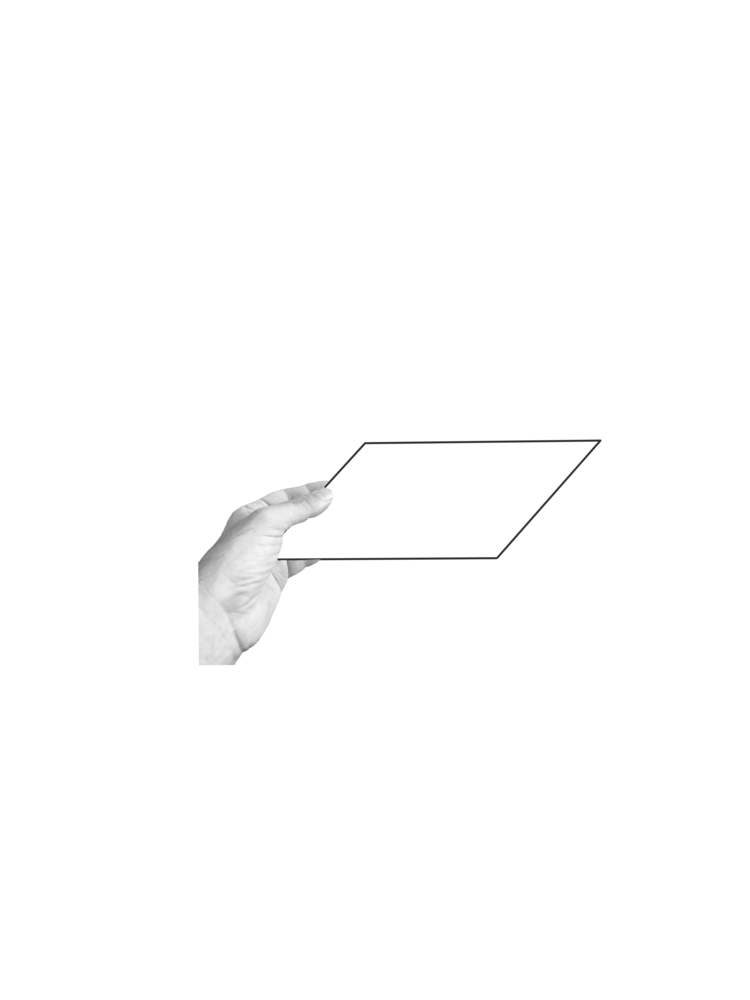 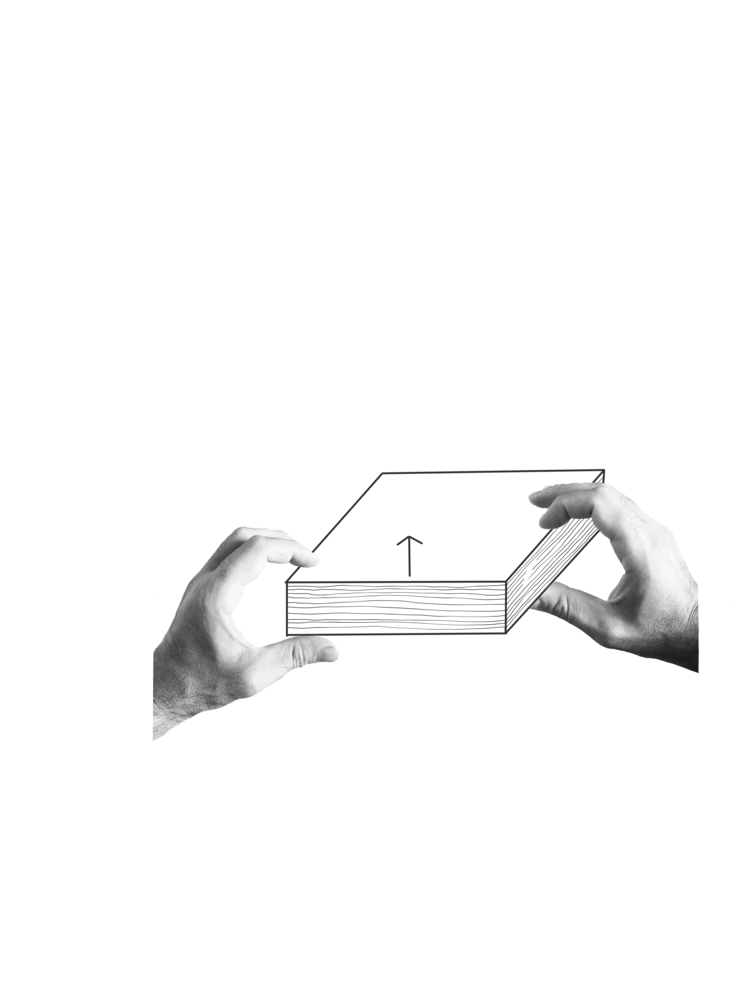 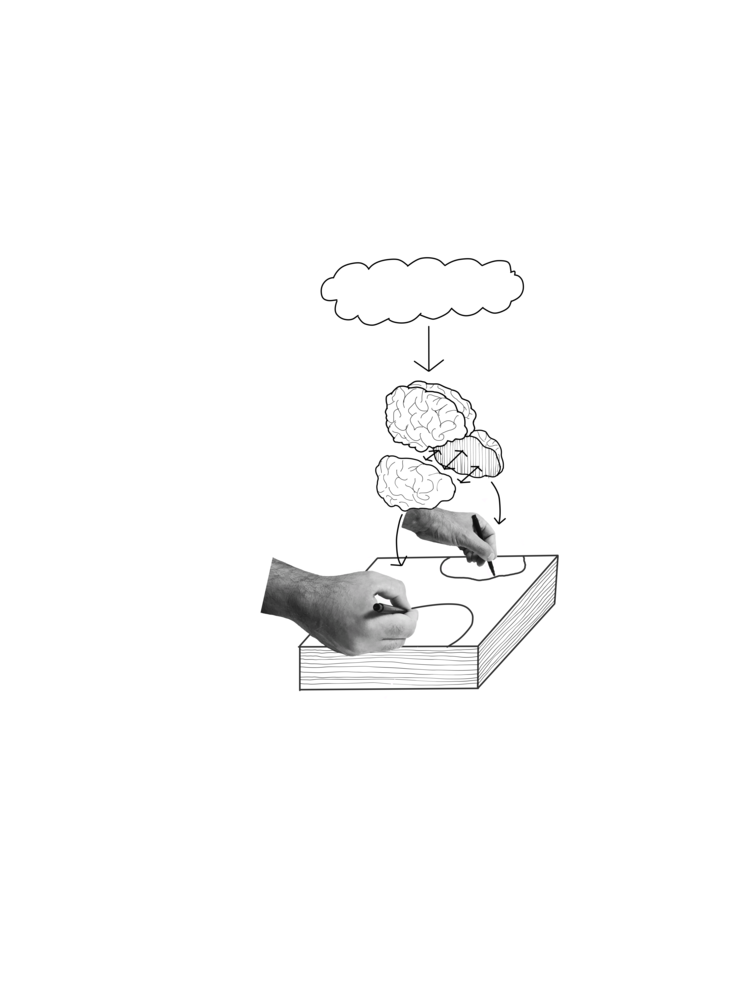 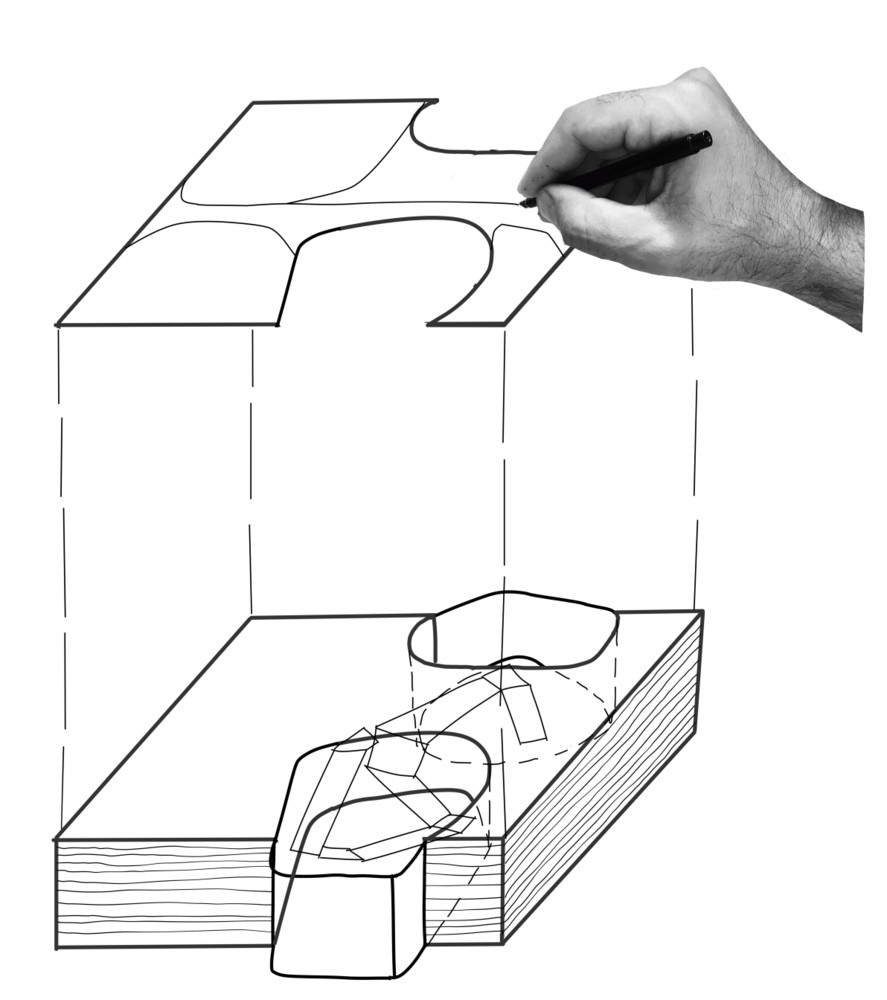 As one approaches the building it is drawn in by curvilinear glass walls. At the same time the base perimeter follows an overall set of orthogonal lines. The mind of the visitor is then combining the two geometric realities of the building, the curve and the line into a complex visual character which leads one in to the various areas of the edifice.

The glass walls are covered by digital LED displays of combine characters from various alphabets. These are constantly scrambling and re-creating hybrid words. It is then possible to imagine perhaps a new language or some sort of combination of languages which are constantly flowing in and around the visitors experience. In that sense words and characters always surround us and it is our choice to combine them into expressions of ideas. And night letters well shine light out into the context. During the day the light of the sun will shine through the glass walls and extend the shadow of the letters onto the various parts of the interior of the building. This signifies that words and characters are constantly around us and allowing us to produce and implement ideas into physical spaces starting from words.

The building is sited to the north east corner of the site close to the main road. This allows for very easy accessibility from the street side and allows for the traffic to flow in and out of the building with the least amount of infrastructure design. At the same time it enables the park space to purvey into the building site and occupy its southern most exposed area. This way the building faces the lake and the park and opens up with large balconies which allow visitors to look out into nature.

Parking is designed to exist on grade. It is possible in the future to create an underground facility if necessary. At the same time parking could be utilized as an exhibition space or at least as usable public space during larger events or outdoor festivities. A bike path is proposed to the south edge of the site following the outline of the design area and into the south portion of the car parking close to the west entrance. The building proposes four entrances to the four sides of the building. This allows for a fully accessible building which opens up to the outdoors and enables visitors to come in from all directions. In this sense the building maintains a constant relationship to its context and adapts on each side to the request of its context.

The museum of writing (MOW) is imagined as a building that is both familiar and completely unconventional. It's geometry appears to be a combination of box like volumes and curves extruded, glass and solid surfaces, graphics and materials expressed to their authenticity. The building is designed to be lived both indoors and outdoors. Perhaps with a sense of continuous flow between the two realms. It's material expression it's both of the natural and artificial worlds.

We live perhaps at an historical time where creativity and business mind, logic and intuition, Science and spirituality combine and collide into a universe of possibilities, where all sorts of new expressions of work, pleasure and social interaction proliferate. In this sense we see the museum of writing as the expression of both the right side of the brain, the creative so to say, and the left-hand, which operates as its execution, in a logical and practical way. We see riding today as both an incredibly creative expression of who we are and yet I totally practical way to constantly receive and emit information.